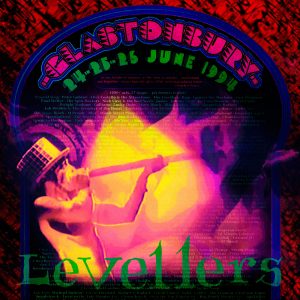 Locked away in the BBC archives for a quarter of a century, Glastonbury ‘94 is finally being released to mark its 25th anniversary.

The band’s main stage appearance in 1992 is legendary enough but their headline performance on the Pyramid Stage in 1994 is even more so, in front of the festival’s largest ever crowd.

Michael Eavis refuted this statistic in the documentary, A Curious Life, but we don’t care because you were there…we saw you!

Still taking on the world, still angry but now with dizzying success, this is the band at their peak and the best live recording of the Levellers you’ll ever hear.

Previously unreleased, this album has been mastered from the BBCs original broadcast tapes by Jon Sevink