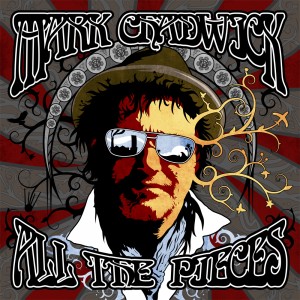 One of the UK’s most successful songwriters, Mark Chadwick has co-written 20 chart singles and 6 Top 40 albums (including a Number 1) as part of The Levellers, the band he has fronted for over 20 years. All The Pieces is however, not a Levellers album. Whilst the voice may be familiar, that is where the similarities end.

Instead, this is an intensely personal collection of folk-tinged acoustic pop tracks, written and refined over the course of the last two decades. Brought to life by award-winning producer Sean Lakeman, Mark is joined by an all star cast of some of the UK s greatest folk musicians. Both Sean and Seth Lakeman, along with Dan Donnelly (Watercress, Wonder Stuff), Martin Pannett (McDermott s 2 Hours), Toby May (Clearlake), Daniel Goddard (aka DBG) and Ben Nicholls (Dennis Hopper’s Choppers) all perform on the album, and Mark’s singing is complemented by the astoundingly beautiful voice of Equation’s Kathryn Roberts.